Even A Diva Knows, Sex Ain't Love, But One Good Interview Though....

Many of you know that I've been doing some PR and Social work for indie films for the last few years and well I've been working with an indie filmmaker by the name of Will Adams on the premiere of his new film, Sex Ain't Love. Now let me admit I was having some anxiety about the results and how things were going until

in his weekly segment, Seriously Ignorant News. We sold out of tickets to the premiere shortly after that! A sista was feeling blessed! Listen here

Well after that segment aired I was like welp there are just 2 days left to the premiere and no news people have contacted me about doing an interview about the movie or my client! At this point I'm still feeling blessed but beginning to be stressed! But I decide to dig in my heels and send one more e-mail and this time I would use the clip from the Tom Joyner show. So I crafted a fabulous e-mail that included the previous pitch along with the new clip from Tom Joyner show and with in 15 minutes I was contacted by Good Day Chicago!

Watch the video of Will and Damon below!

So here are a few videos from this weekends events!

Post by Aubrey Jillil Marquez.
This one is of my client Aubrey Marquez as he struts his stuff on the Red Carpet at the

Englewood International Film Festival!! He is a Brand Ambassador for another client

Kougnutz! Be sure to head to their website to get your own

I'm soo excited the premiere of  Sex Ain't Love turned out  AWESOME! We SOLD OUT TWICE! 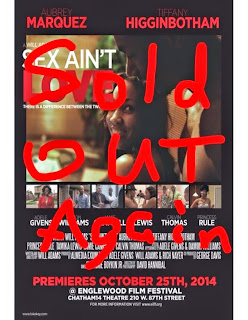 Go to the facebook page of The Work Of Will Adams to see more!
https://www.facebook.com/lokekey
Posted by socialmmmdiva at 11:24 AM 5 comments:

Sometimes it's good to take a walk down memory lane and do something that reminds us of a good time! And soooooooooooooooooooo I present you with Alphonso doing the "Carlton" my family and I really enjoyed the Fresh Prince of BelAire, especially the episodes when Cartlon and sometimes Will did this dance! So enjoy!!

Posted by socialmmmdiva at 6:19 AM No comments: