After getting stuck up on a hill in the middle of the night WITH NO PHONE SERVICE just outside of El Paso, Texas during a thunderstorm/flash flood and having a"God, you better do something!" moment with the Lord. The Doggy Diva Diamond and I made it to Pheonix, talking to various cousins along the way(when there was service). Chatting with"the cousins" not only provided me with companionship but allowed me an audience to discuss what it means to be fearless and live life fearlessly. Two of my older cousins that are part of the 50 & fabulous club felt that simple things like moving across country, to a new city and starting a new career over the age of 40 was a fearless and slightly bad ass thing to do! While another set of cousins in the 40 can't last forever club was like "Girl, what took you so long!...You're such a slacker" frame of mind. And when specifically asked what type of life changes would they think it took to add someone to the "living life fearlessly" club, they specifically stated things like living and working abroad, starting their own business, trying things that most black people wouldn't (or what the media tells us aren't stereotypical black things) like learning to fly a plane, zip-lining and jumping out of a plane (apparently some of my cousins are secretly bad ass too)!  So, now I'm getting a glimpse of what other people see in me and why some of them would think that I'm fearless! I mean, after all, I did move across country, to a new city, no job, and very little family. And while I have yet to learn to fly a plane but I have jumped from a plane, zip-lined while on vacation and well I did have my own start-up (remember Goszip Mall, y'all?) Wow! Looking at things from a new perspective I'm looking at the palm trees that are coming up on my left and pop in Pac's, "California love" and I'm feeling a little bad ass and thinking yep I'm experiencing a bit of fearlessness and you know what? I think I like it!
Chatting with "the cousins" helped keep me focused, entertained and gave me a new perspective on what "living life fearlessly" really is! And you know what else happened on the ride back to Cali? I conquered my fear of driving across country by myself! I only had 2 panic attacks on the ride home and hey don't judge me,you never know what you'll do when stuck in a flash flood & thunderstorm in the middle of texas, at night!
Hope you enjoy the pic's and yessssssssssss ,I took a meeting at BuzzFeed before reaching my next set of cousins! More about that later.
Anyhoo I'm gonna shut it down for a bit I'm gonna visit with my lil cousin and talk Warrior's basketball y'all!

Posted by socialmmmdiva at 1:08 AM No comments:

As I was leaving NOLA, headed towards Houston where I intended to stop and see my cousin whom, I've not seen since I became a mother, let alone a Bella!

I got a call from my ex who just may also be my next! Ok, ok so that's probably not gonna happen but it's a nice idea to flirt with.
Anyhoo he called to chat while I drove and he too told me he liked my kick-ass and fearless spirit!
Now y'all I'm like what are people seeing in me that I'm missing! Like, for real, though.  Cuz, when I think about the moves that I've made lately, I just see a Lil Black girl from Richmond California trying to survive and make lemonade out of the lemons that life has thrown at her and rise to the top! I mean where I'm from you're either constantly striving to be the BEST or........OMG, I don't even want to think about it.....

So back to the Ex and him enlightening me on what in the heck I've done to make people think that I'm fearless.

So apparently chucking it all and moving across the country to chase your dream is an act of fearlessness and wait doing simple things like booking a room on Airbnb and driving for Uber they count too!

So basically living life outside of the stereotype is an act of fearlessness! Because when I finally got to Houston and met up with my cousin and told her that I'd be staying at an Airbnb while in town...she was like my aren't you brave! We shared experiences that happened in our lives since we last saw each other in person...it was great!

There's nothing like being with family...for me connecting and sharing ideas,dreams and stories of adventures from the past with those who have the same bloodline is powerful! And I'm not just talking about my foolishness either....I mean stories of brave, bold and plain ole badassness by my parents, grandparents, great-grandparents great aunts and uncles too!

As fate would have it we spent so much time catching up that before I knew it the sun was up and it was time to go!

Life can be funny...especially when memory meets reality...when I was a little girl my cousin came to visit and I remember her as being super duper tall. I used to tell people I wanted to be tall like my cousins on my dad's side... well...it worked because guess what we're the same height!

Yep, she's 5'8 too! LOL,I guess I was really short when I was little because she seemed a lot taller back then! In my mind, she was like 6ft. tall. See for yourself.... 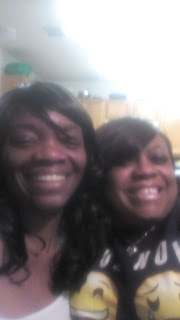 Queue the music...On the road again I just can't wait to get on the road again.... ok ok that's a stretch cuz y'all know that I am not a fan of driving for more than 45 mins...lol 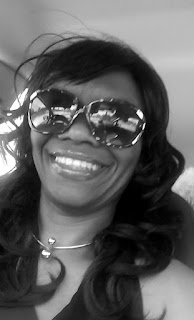 When we last chatted, I'd left  you to ponder what the word "Fearless" means to you and then I gave you the dictionary's definition of the word (see below).

After sliding through Slidell I was able to get my brother from another on the phone again and asked him to explain why he thought that I was fearless. His response because you never let ANYTHING stop you! I was like WOW is that what people think? I mean ...WOW...as I'm about to pull up to my glamson's house with a police escort (Y'all ain't ready for that story yet)! I'm thinking and feeling like my move back to the Bay is a retreat....like I've lost the battle and I'm turning tail and running home to Daddyo! I mean sure I was able to launch Goszip Mall and I held the Sassie's Festival back in 2013 and my Cupcakes & Code events turn out cool all the time. AND I did move across country just me and the Doggy Diva Diamond buuuut I'm not really sure if that makes me fearless or not.

Welp the Boys in Blue, got me to the GlamSon's house, but before I go, "What makes a person fearless to you" ? Leave me a note in the comments.

Before getting back on the road I'm going to share a collage of some of the time I spent with my Glambabies. O, the things the glamkids and I got into while spending 5 amazing days in NOLA(you really are different there)!

We attended one of  A3's first ever little league games; he was totally awesome! Not afraid to hit the ball at all and you should have seen him run those bases like a vet! He was the only one that the coach didn't have to tell what to do and when.

Now that glamdaughter of mine.....she's the epitome of the word FEARLESS and YES her superpowers are in her tiara. Just like her Bella she wears one everyday (YES, she has several different ones. Bella will have to step up her tiara game).  Look at the pictures of her in the collage you will see her sitting in the fire truck...well she asked the fire chief if she could use their bathroom and when we came out, she ran straight to the truck and climbed up and asked for a picture. Mi Chanta had to join her because well Bella wanted her to be safe anyhoo that lil girl knows no fear! 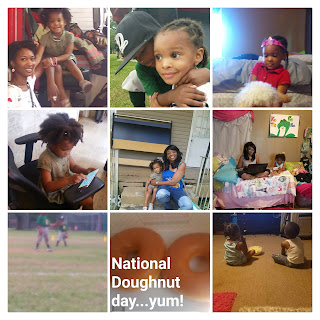 So while I don't believe that I, myself am fearless those Glambabies of mine definitely are!


Posted by socialmmmdiva at 3:18 PM 4 comments:

Wow, I can't believe that the day has come for me to pack the car and head back to the Bay Area!

Right if you know me well and by now you should, you know that I hate to drive and I'm anxious as all get out about this drive I'm about to make across country but anyhoo the Doggy Diva Diamond and I are now on I20 and headed south until it turns into I10 and takes us right on into Slidell, Lousiana!

What a beautiful drive it was from Atlanta to Alabama; believe it or not it was quick and easy too!!

Because I'm not really a fan of road trips I either stop too much or not enough and as luck would have it I probably should have stopped a bit sooner as I had to make a mad dash when I finally stopped the car.  Hang on y'all I'll be right back.


Now where was I? Oh, yeah y'all the roads are so beautiful, lush and green. The view was nice and the weather was great! My parents had me all worked up about some impending storm but God cleared the path for me and there was no rain in sight. I was zooming along as fearlessly and fabulously as could be!

YES, y'all I wore my tiara to give  me a bit of confidence! 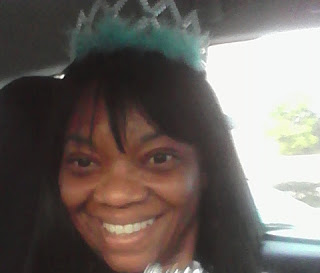 As I'm rolling through Mississippi my phone rings it's a really good guy friend of mines calling to ask if I'd gone back to the Bay Area to watch the NBA  West Coast Semi-Finals series between OKC and my BELOVED Golden State Warriors. Well, I had to come clean and admit that while I was on my way back to the Bay....I wouldn't be going to the games and that I probably wouldn't get home until sometime during the Finals. After, giving my brother from another mother the run down on my return to our beloved California and in particular our "Bay Area" ...he surprised me with telling me how he loved the fact that I was kick ass and FEARLESS!

But before I could get him to explain the line went dead and I couldn't get a signal until the Doggy Diva Diamond and I rolled right into Slidell!

But before I go find those Glambabies of mine.......  What does the word fearless mean to you? I'm not sure if that word can be used to describe me, however, I'm honored that someone thinks that it does!  Let's talk about this some more as I continue on to the Bay!
But for now here's how the dictionary describes the word.

1. without fear; bold or brave

Posted by socialmmmdiva at 7:00 AM 2 comments: